UA-100418307-1
Pherick Morton is available as an eBooks and paperback at Amazon.com. Click the link below to order it. 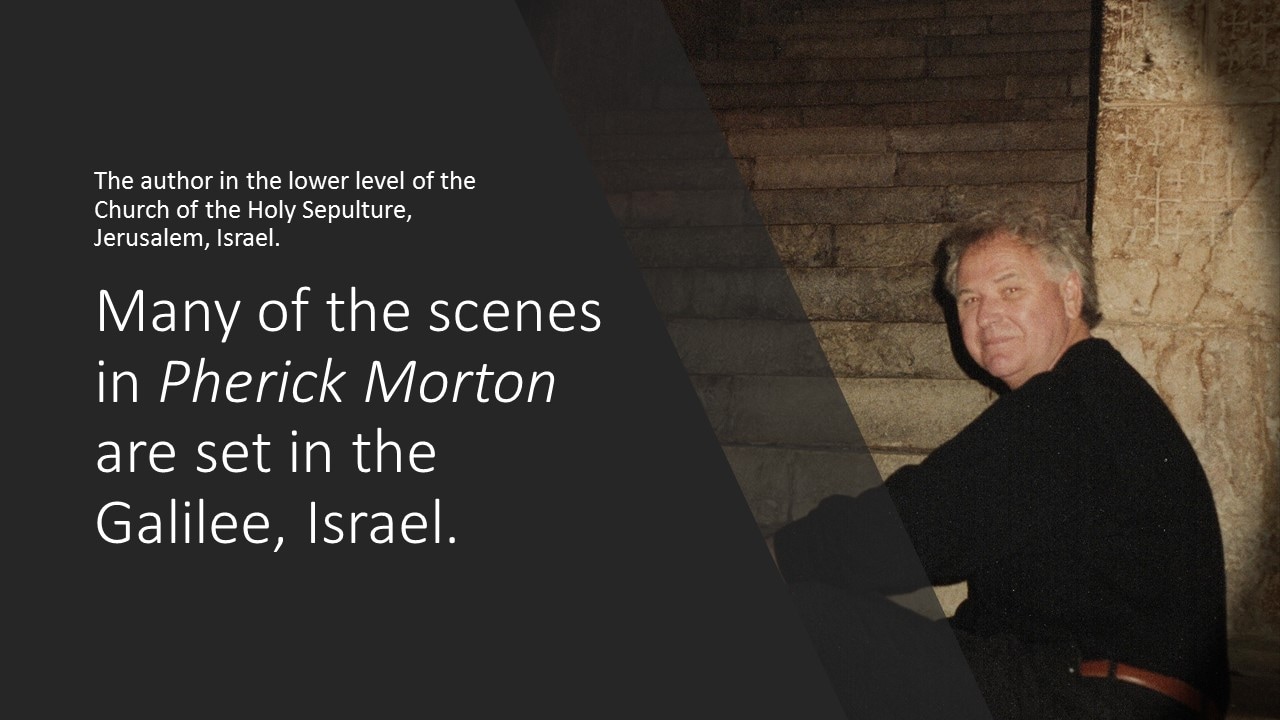 
Pherick Morton is indeed the very best of your efforts to date. It is hard to imagine how you can surpass it, although I am sure you will. It is the most humane of your works.

Pherick Morton: A Life and Beyond is an interesting, well-written story and much more.
In the 1950’s a woman once ran up to Adlai Stevenson after his remarks and exclaimed, “That was brilliant. Every thinking man or woman in America will agree and support you.”
Mr. Stevenson replied, “It is not enough, I need a majority.”
This is to say that this book is not for everyone. If, for example, you believe the Holy Bible is to be read word-by-word (regardless of contradictions) and you consider yourself a Christian literalist, you should avoid this book. Pherick Morton will make you think, and thinking is hard work; it can be exhausting. On the other hand, if you are a thinking person on your own spiritual journey, Pherick Morton is a “must read.”
Suggestion: read chapter 71, “Spiritual Beliefs of Pherick Morton” several times and discuss it with friends.
This book should be shared with family and friends who have more questions than answers.


***
Review of Pherick Morton
I read Pherick Morton on my daughter’s Kindle during the Christmas vacation. It was quite an odyssey. The book has twists and turns, along with surprises—similar to the action that I read in your Emergia novel. You keep readers intrigued with your characters’ evolution and diversity. I thought your themes’ development (nature vs nurture, ends justifying the means, forgiveness, redemption, and faith) evolved also. I wasn’t surprised by Pherick’s beliefs statement, as it probably closely represents your own. Not only were you creative and imaginative, but Pherick Morton was well-researched; I learned a lot. Pherick’s journey led us through such a complex plot.

As with all good writing, Pherick Morton stimulated my thinking. I was caught up in your book—it's “a good read”.

FROM THE PREFACE TO
PHERICK MORTON

Ancient Egyptians believed that a person's heart was where the soul resided. At death, their god Maat placed the dead person's heart in one cup of the Scales of Justice. In the other counterbalanced cup, Maat's headdress-feather rested. If the person's heart was heavier than the feather, passage to paradise and an afterlife was impossible.

Physicists inform that in the bizarre world of quantum physics, particles have the ability of being in two places at the same time. They are also indestructible—in human terms, immortal. Humans are composed of those same particles.

About the Canary Islands

I like to include exotic locales in my novels. After a visit to the Canary Islands, I chose two of them, Tenerife/La Palma, for many of the scenes in Pherick Morton. One of the book's main characters is from the island chain and major plot elements generate from characters visiting La Palma. 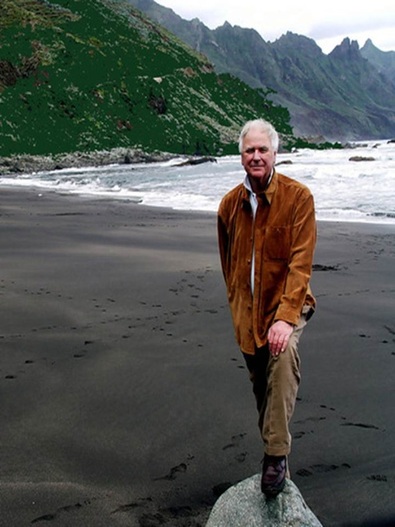 The author on a Tenerife beach.

My defective heart valve was present at birth. It started as a mild heart murmur, a lub-dup stethoscopic sound that only Akron M.D's heard. They introduced the ominous term mitral valve prolapse when I was a teenager. Most of my life it remained innocent―only occasional heart flutterings. I monitored the palpations and felt nothing as I played sports, worked robustly, and pursued sexy women.

Decades later, surgery became necessary. My barely functioning valve was worthless. A bioprosthetic valve made from pig tissue replaced it. Recovering, I recalled women with L-beginning given names who would attest that part of me was swine-like after all.

Now, my mitral valve defect dominated every thought. Rejection and calcification of the foreign tissue accelerated. A second surgery replaced the pig valve with a plastic-metal contrivance. The doctor said it could last twenty years. Just months later, rejections and coronary complications got me here, flat on my back, enervated, and questioning how much longer I had.

Then a small stroke hit me. It wasn't serious, as strokes go, but it added to my certainty that I would not leave the hospital. Three weeks later, I had largely recovered from the stroke’s effects. My cardiologist told me that these strokes were sometimes a consequence of the mechanical valve that he had sewed inside my heart. He ordered a new and more powerful anticoagulant drug regimen to combat a second stroke possibility.

Suddenly, without warning at 9:30 the next morning, I entered a coma.

An ephemeral wave enveloped my consciousness. I lifted, more a soothing drift, from the operating room table to the ceiling. I spotted a dust-covered, hand-lettered sign—written by a long-retired physician with Near Death Experience research aspirations—taped to the top of a large light fixture. My acuity was exceptional, better than any time in my life.

The simple sign was an afterlife test, the doctor’s homage to Hamlet: To be or not to be… you know the rest. A postcard-size, color picture of the doctor looking straight up was below the sentence. His message and picture caused a smile. I passed effortlessly through multiple ceilings, paused, and then hovered above the hospital. Before leaving earth, I saw a child’s red baseball cap on a window ledge. Inexplicitly, my heightened consciousness informed me that it was outside the hospital’s front, on a ledge outside a sixth floor window. It was grimy, pigeon-excrement-encrusted, with Bill’s bill written in besmirched, cursive letters on the bill.

Seconds—perhaps minutes or hours—passed. I perceived images on a flat plane below. Amorphous panoramas from my life appeared like circles on the plane's surface. It appeared as a vacuous liquid, waiting for me to activate images that lay just below the surface. Something imperative happening.

A nebulous image of my personhood, my essence, appeared. A shapeless entity—one that existed before birth―filled me. I was pixilated, terrified, suffused in cosmic energy. I opened myself, trembling. My mind and still-functioning memory leaped into the nebulous unknown.

I was an inconsequential iota—a blurred consciousness tumbling in a vapor that safeguarded other specks like me. There was neither sight nor sound, only a being-sensation.

I impelled ahead. In the distance, a black, isosceles-shaped monolith.

Then before me, an impediment—an ethereal drape. I slowed, then halted before it. Beyond, hazy souls—perhaps deceased family members.

Farther passage must cease. Your life is unfinished, your spirit worthy, yet stained. Your father tarnished you, but you tarnished yourself. More is required. Recall and review your life. Take measure of your flaws. Empathize the hurt and joy you gave others. A profoundly difficult forgiveness is required. Eternity is delayed. Do not lie to yourself. A spiritual tinnitus is now part of you. If you delude or misrepresent during your life review, the ringing will intensify. Continual, mendacious thought will result in maddening decibel increase, leading to spiritual disassociation. The process will end with your irrevocable elimination from the realm of souls—your spirit niche allocated to another. Pherick Morton’s soul will dissolve.

You will remember nothing of this until it is time. Then, dreams, visions, and the growing tinnitus will alert. Do not ignore them. Nothing is more important than your mandatory soul-searching.

I struggled to form questions: Give details. Where am I? When… what? Why won’t I remember?  Who is … what is admonishing me with these commands? Are you God? Is this every human’s fate? How are we communicating?

The communication repeated; slower, then faster; phrase-presented, then nearly word-by-word: the requirements unceasing.

This is hell, not loving heaven, I managed.

Time—seconds, minutes or hours—melded. I spirit-plummeted. Sweetness tasted, smells suffused; resplendent colors lanced my being. A physiological transformation commenced, saturating whatever I was.

Sensations ended. Blackness—nothingness. I was adrift. The void persisted, then spiritual dissonance. An indistinct, far-off light below. I wafted toward it, growing heavy, sullied. Abruptly, a hospital bed; semi-consciousness, gagged breathing, hospital smells. Rhythmic heart monitor chimes, the BP cuff on my left arm inflating, irritating sticks from two IV's in both arms.

“Look …, I choked, “on the ledge of the front sixth floor—proof,” I stammered to a nurse who ignored my spluttering as he adjusted tubes and wires surrounding me. “Bill’s bill … baseball cap—red.”

“Hamlet’s fame… famous words. A sign on the light fixture; the doctor picture.”

A second life before me. My life review commences.